Where are the Dwyer girls today?

Home > News and events > News > Alumni > Where are the Dwyer girls today? 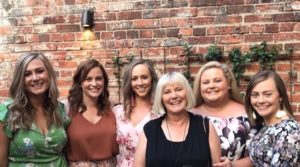 Most alumni of the College in the last few decades would have been taught by Rosemary Dwyer, who continues top teach at St Mary’s – a very esteemed and respected member of our community.

Rosemary and her late husband Brendan, are the proud parents of two sons and five daughters. All the girls attended St Mary’s College. The three elder girls were educated at St Cuthbert’s School until they came to St Mary’s in Year 7. The younger two, Sally and Rebecca, commenced the same year at the College, in Years 4 and 3 respectively.

The Dwyer girls are all young women now, making their way in the world, and these are their stories to date.

Angela (Dwyer) Burgess (2004)
After studying Hospitality and Office Management, Angela worked as a receptionist at The Old Woolstore and in retail at Complete Kitchen Solutions and Affordable Curtains and Blinds. On moving to Melbourne, where she has lived ever since, Angela was the Office Manager of an electrical business. She is now the manager of a family-run electrical business and software company. Angela married in 2009 and has a daughter Chloe. At the time of writing, Angela was waiting to come out of lockdown safely, including overseeing Chloe’s happy return to school. Then Angela hopes to see the electrical business go in the direction of solar installations, while on a personal level, she hopes to visit family all over Tasmania.

Samantha Dwyer (2004)
After leaving school, Samantha worked in various hospitality positions and later in office management at Wrest Point Casino. In 2006 she moved to Spain and worked as a nanny while studying online for a Business degree with the University of Southern Queensland. Samantha married her Spanish husband at St Mary’s Cathedral in 2013. The family now lives in Madrid and includes three daughters, the youngest having been born earlier in 2020. Sam has recently returned to full-time work as an administrator in a British International School in Madrid. She looks forward to being able to travel back to Hobart to introduce the newest member of her family.

Alice (Dwyer) Flynn (2006)
After leaving school Alice worked in fashion retail for a while, and then as a showroom coordinator for the Hobart Kitchen Centre for two years. She then followed her dream of becoming an interior designer by commencing study in Interior Design in 2009 at the UTAS School of Architecture and Design in Launceston. Alice completed her degree with First Class Honours in 2012, receiving the Graduate of the Year Award for Vic/Tas in Interior Design. After working for two local architectural firms and subcontracting for Melbourne firm H2O, Alice then went out on her own as interior designer for private clients and builders part-time. In 2014 Alice married Jason and they are now the doting parents of two year old Jack, with Alice working from home. Alice is also business partner to Jason in their residential/commercial painting company. In the future, Alice would like to start some residential unit developments and perhaps dabble in the renovation market. And of course, provide a sibling for Jack! When the borders reopen, trips to visit family in Australia and that new niece in Spain are on the cards.

Sally Dwyer (2009)
Sally completed a Bachelor of Exercise and Sports Science and a Bachelor of Business Sport Management at Deakin University in 2014. She completed a Masters of Human Nutrition at Deakin in 2020. Sally has worked across the country in a range of Sports Events Management roles, including at Cricket Tasmania, Cricket Australia and Tennis Australia. In 2017 Sally joined the Major Events Team at the City of Melbourne, where she now works to plan and deliver Melbourne Fashion Week, Melbourne Music Week, Moomba, New Years Eve, Firelight and Christmas Festivals. Sally enjoys life in a sunny plant-filled apartment in the heart of Melbourne. She has a passion for fitness and all things food, and having now completed her post-graduate study, is excited to be in the process of switching up her career to delve into the world of culinary nutrition (the science of healthy cooking!).

Rebecca Dwyer (2010)
Rebecca studied at UTAS 2011-2014, to gain her Bachelor of Education. After relief-teaching until mid-year in 2015, Rebecca moved to Spain, teaching English overseas for a year, as well as travelling Europe. When she returned to Hobart in 2016, she taught in relief positions until joining the Tasmanian Department of Education in 2017. She continues to pursue her teaching career with the Department. Rebecca bought her first house in 2019, in Austin’s Ferry, where she has been very happy. She is engaged to be married in 2021, and plans in the future, to travel overseas again, complete further study, build her own home and one day start a family.