Posted on November 17, 2022 in Uncategorized 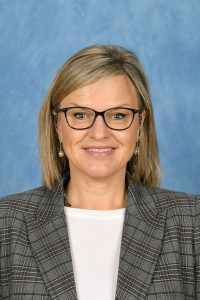 nother of our former scholars who has returned to St Mary’s College to pursue her teaching career, during which she has become a much-loved and very capable fixture at our school.

Teresa first came to St Mary’s in 1978, starting Year 4 with Mrs Shelley Johnston. Until then she was educated at St Therese’s School, and one of the things which she loved about the College was its size and the fact that there was always something new going on and new faces to meet, among both teachers and students. As a secondary student, when her family resided in  Browne Street, she loved being able to walk to school and the convenience of being in close proximity to her sporting fixtures, part-time work and town.

From her primary years, Teresa remembers with great fondness Sister Gabrielle Morgan, Head of the Junior school at the time, as well as the general presence of the other Sisters, including Sister Marilyn. She still remembers being taught Level 3 Maths by Sister Barbara in 1986.

Nagle House was lucky to count Teresa among its members, and netball was the sport to which she was dedicated from her time in the Junior School and throughout Senior School. She was also a committed and dedicated softball player right through to the end of Year 12. Those who know her appreciate greatly Teresa’s wonderful sense of humour, always with an apt word for every occasion. It’s little wonder then that she made loyal friends in her time as a student at the College, and that a group of these friends surround her today still, with whom she catches up regularly and enjoys their camaraderie.

This group of women, according to Teresa, speak with appreciation and nostalgia of their Years 11 and 12. They think it was very progressive of St Mary’s and St Virgil’s Colleges to combine classes to offer a greater breadth of subjects. In addition, to experience the variety of teaching styles and expectations while navigating their way through the complexities of being 17 and18 year-olds were wonderful life lessons.

When asked if she feels that her education at St Mary’s College has affected her life in any way, Teresa comments: “I enjoyed my time at St Mary’s. The academic education was important, however, in retrospect, the informal and incidental way the Sisters and staff guided our moral education has made a lasting impact on me. I feel that the way I have raised my children, the way I have responded to adversity, the career choices I have made and the manner in which I engage with people have been influenced for the better by my years at St Mary’s”.

After graduating in Year 12 in 1987, Teresa enrolled at UTAS in a Bachelor of Education in 1988, completing these studies in 1991. As a freshly minted teacher, Teresa found herself welcomed with open arms by Mrs Ann Stanfield and Sister Barbara, and so she came home to St Mary’s in 1992, quickly cementing her place as a gifted, natural teacher with a priceless sense of humour and a huge capacity to endear herself to all (this writer included).

After marrying in 1994, Teresa had two children, Liam in 1999 and Olivia in 2000. Olivia, of course, was educated at St Mary’s College, and both Liam and Olivia are now wonderful young adults engaged in university studies.In 2006 Teresa left St Mary’s to widen her experiences, teaching at Hutchins from 2006-2012. Luckily for us, she was drawn again to St Mary’s, where she has been teaching since 2013, continuing to consolidate her enviable range of skills and engaging in her inimitable way with students and staff alike.