Students showcase What Matters to them 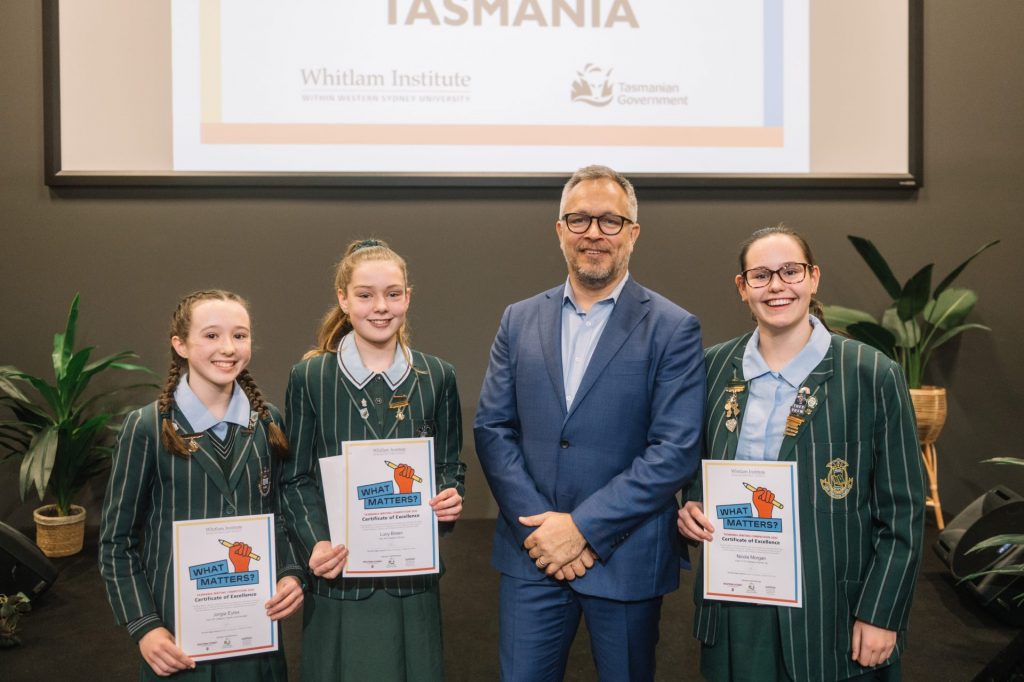 Three budding authors from St Mary’s College have had their writing talents recognised in the Tasmanian division of the 2022 ‘What Matters?’ competition.

A big congratulations to Lucy, who was crowned state winner of the Year 5/6 category; Jorgia, who received a highly commended award (Year 5/6) and Nicola, who was named state runner-up in the Year 11/12 category.

And in more good news for the College, we have recently learnt that Jorgia and Nicola’s entries have been shortlisted for the national awards.

Both students should be commended for their bravery in sharing their powerful and inspiring stories, titled ‘Weathering the storm’ and ‘What matters is time’ respectively, which you can read below.

Inspired by Gough Whitlam’s commitment to involving young people in the shaping of Australia’s future, the competition gives students in Years 5-12 the opportunity to explore current issues and make informed commentary on matters affecting them.

The category finalists and our overall winners will be announced soon, so watch this space! Well done to all entrants.

For more information about the competition and to read the full shortlist, please visit this link.

An unexpected gust of wind blew the light out of our lives. The sky darkening by the minute. Our lives flooded with hard rain, washing away life as we once knew it. Lightning cracked, leaving us stung with an unbearable pain. Grief.

2015 started as a wonderful year. A new kindergarten student, a new big sister. Who knew the year would take such a sudden, unimaginable turn. In the October school holidays, our family of four, took a vacation to Bicheno. An unforgettable holiday, for all the wrong reasons. A tragic event occurred towards the end of our trip. My perfectly healthy 19 month old sister tragically passed from myocarditis, a condition that attacks the heart. It feels like the world stops. It feels like you are lost, with nowhere to go. Unknowing of what to do next. For a while you feel like you are frozen in that memory. Reliving that same day, over and over, until you can’t go on. Until you break down into tears. Until the world feels like it’s just came tumbling down and you’re stuck under the debris. There isn’t one way to deal with grief. It’s different for everyone. There are hundreds of books about grief, but no story will be the same as yours. Your story is one that only you can write. There’ll be triggers that’ll pop up out of nowhere, these triggers will be different for each member of your family. No one can comprehend grief until they live it. I didn’t want to have to miss my sister, I still don’t. Grief is painful. Grief is diverse. It is the hardest thing that I’ve ever experienced. But, essentially grief is just remembering someone that you love. A reminder of someone who is no longer with you physically, but someone who’s ever present in your life. In time, you’ll stop feeling so sad every time you think of them. Sadness will start to swim alongside happiness, overwhelming you as you recount who they were, the memories made and the impact they had and still have on your life. The sun rises and sets. The clock keeps ticking. People continue their busy lives. Life goes on, it has to. But life won’t ever be the same. Conversations will arise, questions will be asked. When I moved schools, a common conversation starter was, “Do you have any siblings?” How do you answer, those ordinarily simple questions? You don’t know whether you’re trying to protect yourself or the other person in your response. There are all sorts of triggers that people will never begin to understand. Grief can make you feel alone. Like a harsh beast you have to keep locked away. The truth is you can’t; it’s a part of who you are. Grief isn’t a battle you can fight alone. The ocean washes away her name written in the soft sand. A heart filled with seaweed and shells is made in her memory. Ladybugs subtly bring her into our thoughts. Fond memories are retold. Friends comfort me, surround me with support. People that never knew her, still make tributes to her. Her memory lives on. She continues to make an impact. Never forget them because it’s too painful to remember. Traditions are made and instead of making memories with them, you make memories about them. Memories that would never have been made if it wasn’t for them. Dark clouds always loom, threatening to burst even on the happiest days. The love for them will always be there, like warm rays of sun shining through gaps in the clouds.

I didn’t think time mattered until my father died. I just believed time would always be there for me. But alas, it slipped through my fingers, and before I knew it, time mattered too late. People don’t normally think about time, because talking about time leads to thoughts of death, and we all fear death. We all fear the unknown. But with no thoughts of death and time, we take what matters most for granted.

We are all born with an hourglass where the sand falls, counting down from our first breath to our last. You, right now, may have thought very little of death and time. You may think you have plenty of it, but all it takes is one car, one thought, one stray blood cell, one too many drinks, just one second, and that person you once had plenty of time with is taken. Because an hourglass can only take so much trauma before it breaks, and no amount of glue can hold together the glass and sand. I watched the sand hit the bottom of my father’s hourglass. I knew that was it. That was my last chance to hold onto him. Sitting there, grasping at the feeling of his finger wrapped around mine. Held my dying father’s hand as he breathed deeply, body limp. His eyes closed off to the world, never to see it again. Skin growing cold. Measured breaths were taken mechanically, unlike just hours before when they had character. People don’t realise the character that breath holds. What I am left with after that night was dying breaths where anyone could have been his last. In. out. In. out. In. I would sit like an eagle watching prey. Mesmerised by each breath he had taken. Because it was my signal, he lived, and I still had him. But the hourglass was ticking down, and the grains were falling faster. Time gave in. I remember telling him I would see him tomorrow. That I loved him. I don’t, however, remember his response. That haunts me more than any ghost could. Even then I didn’t realise how deeply time mattered, I couldn’t see it through the naive thought that I had longer: that I could beat time. The time I took for granted that I didn’t think mattered is all I have left now. The hand I held to be safe crossing the street, the feet I stood on to learn to walk and dance with, and the eyes that meant safety and happiness when they looked into mine: all is gone. I only had a short 15 years with the man. He will never see me graduate any higher schooling, me driving, any formal, any partner, my wedding – nothing. He misses it all. There is no sand left in the hourglass. There is nothing but a pot in the living room and an invitation he will never get to rsvp too.

All I can do now is never take time for granted: every experience, every step, every breath is my sand falling steadily. I will forever regret not taking time seriously, not treating it as if it mattered because, without it, we have nothing.

Unfamiliar instruments beat to a steady rhythm. A consistent blur of beeps and soft whirs. Strangers moved efficiently, then left, muttering anxiously outside the door. One lone visitor, a child, sat beside the hospital bed. Her eyes were fixed on the thin, pale body lying peacefully. She looked so fragile and vulnerable, with her silver hair streaked across the threadbare, cheap pillow. The child missed seeing her small twinkly eyes, now all she saw was closed eyelids. There was only a faint trace of the great grandmother she’d been before. She had a swarm of questions spiralling through her head, ones that she was certainly dreading answers for. She took a deep breath, realising that she hadn’t done so in a while. The oxygen felt satisfyingly welcome, calming her. It allowed her to sort through her crowded thoughts, and to gently nudge her back into the positives.She tried to remember that her great grandmother had been lucky to live the life she had, all the things she’d achieved, the people who were with her every step. Maybe now she can finally rejoice with them again.Her eyes were steadily shut, and she felt no urge to open them. After years of feeling a slight prickly shudder at the one word, “death”, she knew now how silly she’d been. She’d grasped every opportunity to shine, with a stray thought forever whispering in the back of her mind…  “you only have one chance.” Or, “you only live once, you may never get another shot.” She took all that life had thrown at her, whether she was happy or not. She hadn’t ever wanted to end her life in regret. Never wanted to think of what could have been. Now, the only regret she had was never shoving away that one whisper in the back of her mind. Never letting herself be satisfied. To sit back, and reflect on the gorgeous gift she adored dearly. The one thing in her life that allowed her to push through, the thing that mattered most. Her family. She felt a pang of guilt. Family. The word triggered something deep inside her. She reminisced about the people in her life, the people who she’d soon be joining. And leaving behind.She felt a sudden, gentle squeeze. A warm, smooth hand in her own. Without warning, her eyelids lifted slightly. She felt a jolt, a duty to peer through the thin layer of eyelashes. Perhaps the last glimpse of her great granddaughter. She was sitting close, wet smears around her face, a scrappy attempt to hide her tears. She felt a tear slide down her cheek, seeing her great granddaughter crying. With her last remaining strength she hoped that she’d know it’s a happy tear. Just for her. She felt a warm glow deep inside herself, a place she hadn’t felt anything before. It seemed to be lifting, tugging to be free. And with that, she knew it was time to go.She looked down on the patient for the last time, immersed in deep love. A tear rolled down the wrinkly cheek. She felt it wasn’t because she was fearfully awaiting death. Maybe, it represented her love. She didn’t know what made her think this, but she felt certain it had some grain of truth. And no matter what, it formed a smile on her face. As she looked up at her parent’s smiles, she knew that whatever happened, her family would be there for her. Despite living in a different generation to her great grandmother, she had had a family too. And that’s what matters.