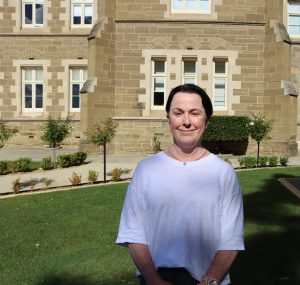 Veronica Harris is another former student of St Mary’s College who has returned here to teach.

Veronica came to the College at the age of seven, starting in Year 1 in 1977. Her enrolment was precipitated by her family’s move from Howrah to Elizabeth Street, where her parents ran a newsagency which specialised in selling car manuals. Veronica has happy memories of living over the shop which is now a restaurant.

During Veronica’s era at the College, many of the Sisters were still classroom teachers, and she remembers being taught by Sisters Kieran, Joseph and Gabrielle, with Sister Barbara as Principal of the school. Veronica’s two brothers were also educated at the College in their infant years.

Hockey was the sport of Veronica’s choice, although she recalls that her coach had a policy of only allowing the good players on the field. As a result, Veronica rarely found herself on the field. However, such was her commitment that she was once awarded a medal for her determination in attending every single practice session, as well as all the games. She ruefully recalls that her fear of the ball tended to inhibit her!

Veronica belonged to College House during her student years and remembers her House suffering a long string of defeats over the years, but she remained a stalwart member. On a brighter note, she recalls playing Oliver in a mini production of Oliver during her early Senior School years.

Veronica remembers always being a ‘good girl’ at school, although in Year 7 she joined an ‘interesting’ crowd. One of their activities which remains with her is their discovery of a little door at the bottom of a set of stairs. Inside, on the dirt, the girls made themselves a hideaway framed by the foundations of the convent. In this secret haven, they lit candles and ate their snacks. Who knows how long this innocent fun might have continued, had they not one day foolishly skipped Sister Kieran’s Religion class? The door was immediately locked and remains that way today!

In retrospect, Veronica feels that she struggled academically during her school years, but that everything came together for her in her very enjoyable Years 11 and 12. Joining classes with the St Virgil’s boys from up the hill resulted in a huge friendship group and a great deal of fun (as well as learning, of course!).

Throughout her school years, Veronica enjoyed talking and banter, and the atmosphere of Years 11 and 12 allowed her to really tap into these aspects of herself and to expand her friendship groups. Her peers and friends from these happy years are now spread around Tasmania and Australia, and like Veronica, are doing wonderful things in their lives. Facebook keeps their friendships alive and helps them arrange to physically catch up at times as well.

On completion of Year 12, Veronica enrolled at UTAS, and by the age of 20, she had graduated with a Bachelor of Education. In no time at all, she had secured a teaching position in Year 2 at John Paul  II School at Rokeby, where she remained for nine years. From there, she moved to St Paul’s, Bridgewater, and then to St Cuthbert’s, Lindisfarne. During her time at St Cuthbert’s, Veronica also worked at several other schools in the area of Special Learning Needs coordination.

In 2014, Veronica commenced teaching at St Mary’s College as a Lantern teacher, working with Jeanette Sullivan. She acted in Jeanette’s role as Coordinator later in that year, before becoming Lantern Coordinator of the Junior School. She took a year’s leave in 2017 to teach at the Southern Support School, teaching high-needs students.

On her return to St Mary’s the following year, Veronica took up a position as a secondary teacher, teaching HaSS and Religion. Over a long and fruitful career to date, Veronica has taught from Kindergarten to Year 10 and would like to teach Religion in Years 11 and 12 to complete the circle.

Veronica’s kindness, commitment and dedication is appreciated by all her students, as well as by her fellow staff members, who enjoy her gift of friendship.