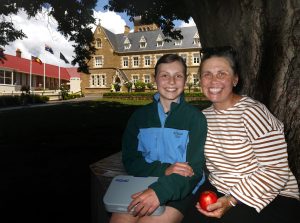 It will come as no surprise that there are many alumni among our teaching staff—they loved their schooldays so much that they wanted to come back for more!

This was the case for Nicole (Nicki) Shanny (class of 1994), or ‘Mrs Shanny’, as she is known to her students.

Nicki commenced at St Mary’s College in 1985 in Year 3. At the time, Sister Barbara was Principal of the College, and Sister Marilyn and the late Sister Joseph also had roles in the school. The late Sister Ona was Principal in 1994, and Nicki still treasures fond memories of working as a Prefect with that delightful Sister.

Nicki laughingly recalls that she ‘played netball badly’ as her sporting contribution to school life. She also played the clarinet in the Concert Band and Jazz Band. She threw herself into the social action aspects of school as a member of Vinnies over a number of years. This led to her being appointed the charity/mission Prefect in Year 12, and in later years to her reconnection as a member of the St Mary’s College Staff Loui’s Van Team.

Nicki was committed to her studies, loving reading and spelling in her early days, and later, the opportunities to participate in school camps and class retreats. She maintains many close friendships from her time at St Mary’s and in fact now teaches next door to her old friend Jayne (Dickson) Brown!

Nicki was a dedicated member of College House. She felt that she benefitted greatly from being taught by ‘so many wonderful, genuine, invested, kind and dedicated teachers’ and was inspired by them to become a teacher herself. In fact, when she had her own children, Freya and Joe, she enrolled them at St Mary’s so that they too could experience the community, guidance and enduring friendships which marked her own education.

Nicki studied teaching at UTAS, and during her final year in 1999, she was invited by the Principal of St Mary’s College, Mrs Ann Stanfield, to cover for a term during which a teacher was away. Her first year after graduation saw Nicki teaching at Immaculate Heart School, followed by an appointment to Dominic College, where she worked until 2013. In 2014, Nicki came home to St Mary’s College, where she has taught ever since.

On the day of her graduation from UTAS, Nicki became engaged to the love of her life, Phil Shanny. And who knew that 21 years later, they would both be working at the College? Phil is our amazing Murphy’s Café Manager and College Sustainability Officer. Phil and Nicki are very proud of Freya, now a Year 9 student at the College, and Joe, a Year 7 student at St Virgil’s College.