2018 marked the 150th anniversary of the opening of St Mary’s College, with all members of the College community helping us celebrate the occasion through a number of events during the year.

The College’s 150th anniversary celebrations officially commenced with a staff reunion to mark exactly 150 years since the school was founded. Staff members, both past and present, travelled from all corners of Australia to attend the gathering, which included a Liturgy in the Adrian Doyle Chapel, nostalgic tours of the College and an afternoon tea complete with musical entertainment and a 150th birthday cake.

On Tuesday 6 February the College gathered as a whole school community to be presented with the 150th Celebration Badges. The badges, which were blessed by His Grace Archbishop Emeritus Adrian Doyle AM DCL, were distributed to our 970 students and 150 staff members to wear proudly throughout our anniversary year.

St Mary’s College was bathed in a sea of green as we celebrated 150 years of our Irish beginnings with a community ‘fun day’. Past and present students, teachers and parents took part in the festivities, which centered on a program of Irish music and dancing, colonial dress-ups and old-fashioned games dating back to our 19th century heritage. Guests enjoyed historic tours of the College, green food and a fancy-dress parade showcasing St Mary’s College uniforms through the ages, with children kept amused with face painting, a scavenger hunt and jumping castle.

A planned program of milestone anniversary events commenced on 10 May with a cocktail party hosted the Governor of Tasmania, Her Excellency Professor the Honourable Kate Warner AC and Mr Richard Warner at Government House Tasmania. One hundred and fourteen invited guests attended the reception – including staff, parents and friends of the College and other dignitaries. Set in the magnificent surrounds of the ballroom, the warm and dignified occasion was a wonderful opportunity for attendees to connect and mingle with one another, while escaping the evening’s torrential rain and fierce wind.

Our 150th Anniversary Gala Mass was a beautiful and spiritual celebration of our 150th. With enchanting music, a moving speech by 2018 College Head Prefect, Isobel Kuo, striking lanterns adorning the walls and spaces of St Mary’s Cathedral, and a very special lantern procession featuring our smallest and tallest students, the Mass will be ingrained in the hearts of our College community for a long time. While the wet weather conditions forced the cancellation of the historic walking tours scheduled for that afternoon, Heritage Officer Margaret Rootes generously opened Fermoy Cottage for visitors who were keen to view our historic memorabilia prior to the Mass.

The St Mary’s College 150th Anniversary Gala Dinner was the marquee event of our sesquicentenary celebrations. The event saw the venue’s Federation Ballroom, Hotel Grand Chancellor, packed to the rafters, as more than 640 guests were treated to a three-course meal, with the talented Australian Army Band Tasmania providing a live musical backdrop of smooth jazz tunes to keep feet tapping. Everyone was in great spirits as we rejoiced in stories from days at St Mary’s and reacquainted ourselves with old friends. The dinner formalities concluded with the cutting of the 150th birthday cake by our Presentation Sisters, and a rousing rendition of our school song, the Alma Mater, that echoed throughout the halls of the Grand Chancellor building.

Hosted by the College’s Parents and Friends’ Association, the 150th Anniversary Grand Bazaar was the icing on the cake on what was a successful anniversary year. A historic spin on our regular school fair, the event was jam-packed with food, sideshow games, face painting, raffles, crafts and a Grand Bazaar poster competition.

Researched and written by College Heritage Officer, Margaret Rootes, this beautiful coffee table book is a keepsake for current families, or a thoughtful gift for any St Mary’s alumni who still holds the College close to their heart. 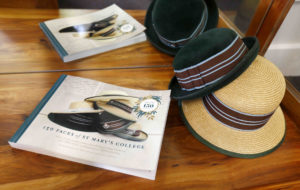 You’re bound to see some faces you recognise as you flick through more than 288 pages of anecdotes, memories and photographs.

In celebration of the 150th year, the College commissioned a number of limited-edition souvenir items which were available for purchase by the public.

Local artist Esther Shohet’s original piece was created to showcase Hobart’s lively connection to St Mary’s College. Among the historic buildings and many facilities, you can see students at play and a nod to the Presentation Sisters foundress, Nano Nagle.

We thank both Peter and Esther for their beautiful contribution to our school and for managing to capture the St Mary’s College spirit in their works.

A life-sized sculpture of Nano Nagle, the foundational leader of the Presentation Sisters, was unveiled and blessed in a ceremony held at the College on Friday 9 February 2018. The 1.5 metre installation of the Irish-born woman, famously known as ‘the lady with the lantern’ was commissioned by the College to commemorate our 150th anniversary.

It is the work of Tasmanian artist, Ben Tolhurst, who carved the figure using dolerite (blue stone) for the face and body, and South Australian marble for the lantern, which encompasses a Nano heart at its centre

Open to all members of the College community, the competition was an opportunity for our emerging artists to showcase their work at our gala dinner.

Submissions could range from 2D and 3D media and could be individual or collaborative pieces, and were required to be in the theme of ‘150 Years at St Mary’s College’.

The competition received a delightful array of entries across all award categories.

Our judging panel was not only impressed with the level of talent on display, but the participants’ ability to interpret the competition’s theme in such creative and insightful ways.

Congratulations to the following individuals who received awards in the St Mary’s College 150th Anniversary Competition: